On Savitribai Birth Anniversary: Protests Against Anti-Love and Anti-Farmer Laws 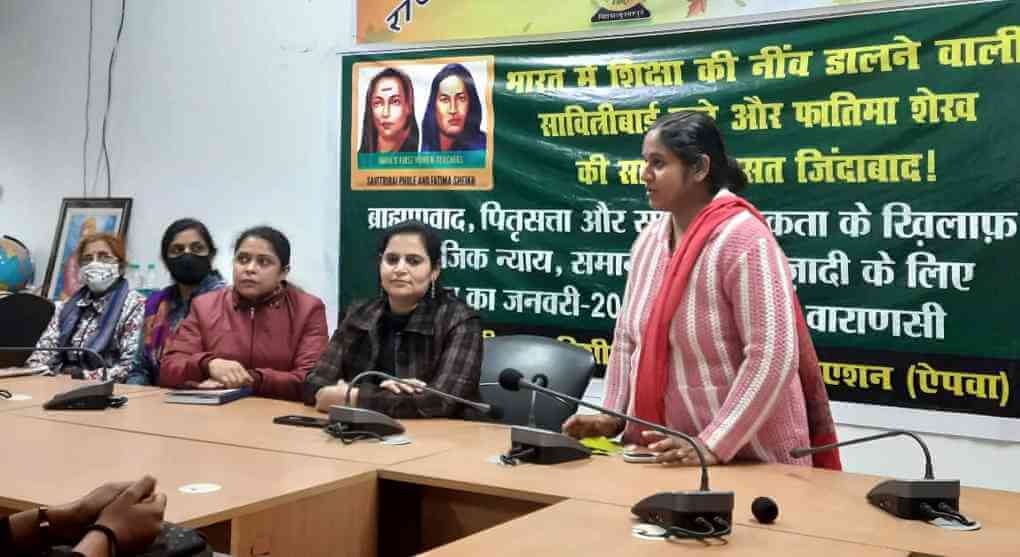 On 3 January, marking the 190th birth anniversary of pioneering educator of girls and anti-caste crusader Savitribai Phule, women all over India held protest gatherings demanding repeal of the anti-love and anti-farmer laws respectively. BJP regimes in UP, Uttarakhand, Haryana, MP, Karnataka and other states have either introduced or are in the process of introducing laws to deter and harass inter-faith love and marriage. These laws are like the Nazi “blood purity” laws and they are violent attacks on women’s freedom and Muslims’ equality and dignity. Farmers all over India are protesting the three anti-farmer laws. The anti-love and anti-farmer laws are both assaults on the Constitution of India.

AIPWA, calling for a campaign against Brahminism, Patriarchy and Communalism from 3-9 January in memory of Savitribai and her comrade and fellow teacher Fatima Sheikh, pointed out that the BJP and RSS are waging war on the friendship, unity and progressive values of Savitri and Fatima today. They called for a powerful movement defending the rights which Savitri and Fatima achieved through their courageous resistance to Brahminical forces in their own time.

In Bihar, such protests were held in every district and in several areas in Patna city, where girls and women gathered and agreed to set up libraries in memory of Savitri and Fatima. In Paliganj, AIPWA invited CPIML MLA Sandeep Saurav to address their gathering.

In Varanasi, AIPWA activists interacted with students of the Government School for Girls, urging them to understand and resist Brahminism, patriarchy and communalism.

In Udaipur, Rajasthan, AIPWA held a gathering where women pledged to fight Brahminism, patriarchy and communalism.