Tractor Marches Across Bihar on 26 January 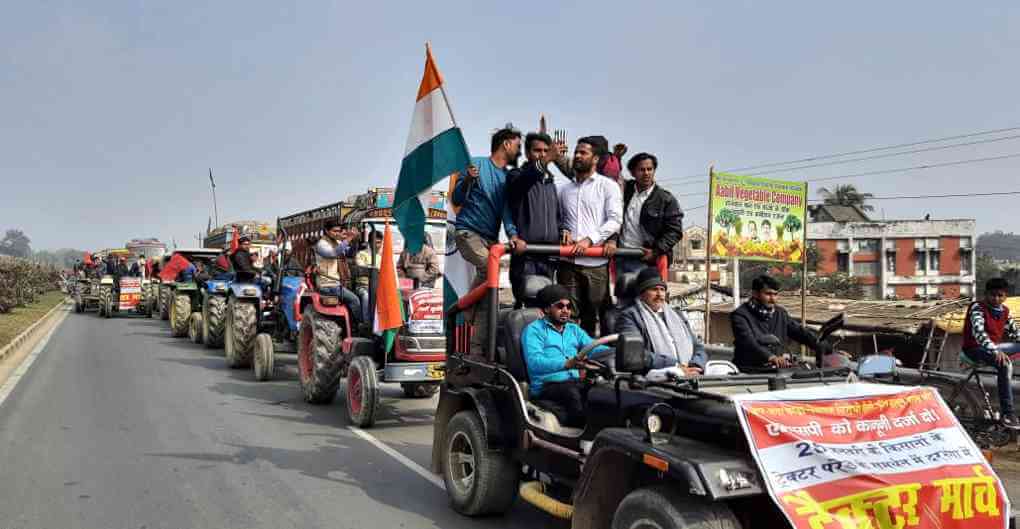 Tractor marches were organized across Bihar on 26 January on the occasion of Republic Day to express solidarity with farmers demanding repeal of the three black farm laws and legal status for MSP in response to the call given by CPIML and All India Kisan Mahasabha.

CPIML Bihar Secretary Kunal said the tractor marches were held at District and Block HQs in rural areas of Bihar including places like Arwal, Eastern Champaran, Araria, Masaurhi, Paliganj, Beguserai, Buxar etc. He further said that preparations for the human chain on 30 January called by the Mahagathbandhan are also on in full swing.

Torchlight processions were also held on 25 January at Patna and all other District Hqs in support of farmers.

Addressing the meeting at Chitkohra Golambar Dhirendra Jha appealed to the people to make the human chain on 30 January a historic one and teach the tyrannical Modi government a lesson.

Tractor marches in other Districts of the State were also impressive. AIKM and other farmers' organizations jointly organized the march in Beguserai attended by thousands. A motorcycle rally was organized by AIKM at Lalganj in Vaishali, while more than a hundred tractors took to the road in Darbhanga and the huge rally on NH 57 was a sight to see, attended by CPIML, Insaf Manch and RYA activists.