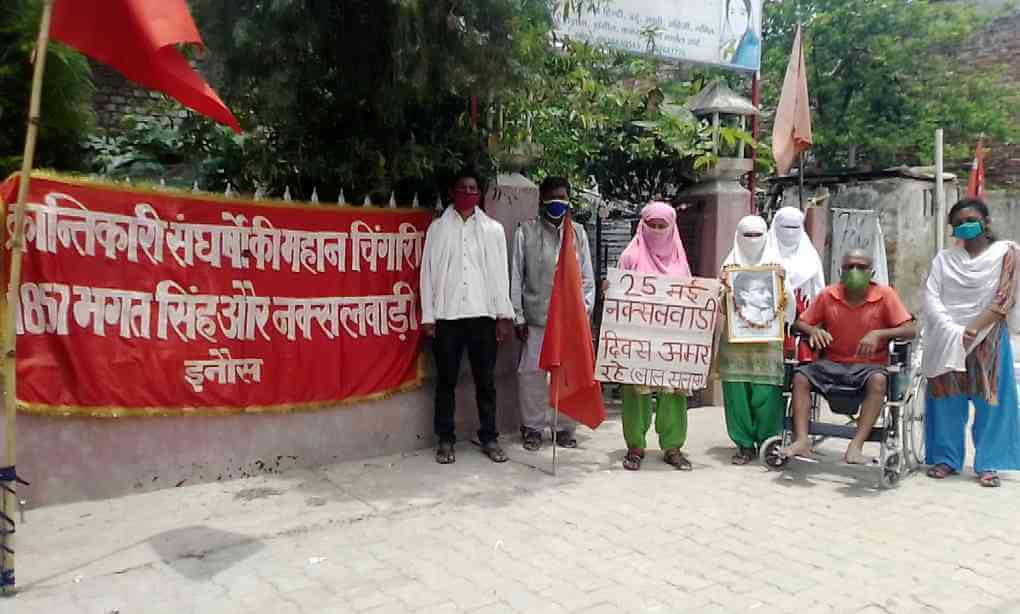 CPIML commemorated the 54th Naxalbari Day on 25 May all over the country. Various programmes and pledge meetings were held in party offices and in open at different places maintaining Covid norms. Party activists and supporters gathered to reiterate the pledge to defeat communal fascist company raj and for building a secular democratic people's India.

In Uttar Pradesh various CPIML District units observed the 54th anniversary of the Naxalbari peasants' revolt by paying tribute to the martyrs and pledging to intensify the struggle against the current fascist regime in the country. State Secretary Sudhakar Yadav led the program in Chandauli District where he said that all the ruling class acts of repression could not prevent the spread of revolutionary consciousness started by the Naxalbari movement and this will continue till a truly democratic India is achieved. The Naxalbari Day programs also held at Naugarh and Sakaldiha. In Kushinagar District a meeting was organized at Tamkuhi Raj. Programs were also organized in Ballia, Ghazipur and Azamgarh Districts. The leaders expressed solidarity with the ongoing farmers' movement and said that 54 years after the Naxalbari movement farmers are today once again fighting to repeal the Modi government's 3 black farm laws and workers are fighting to repeal anti-worker labour codes and corporate enslavement. Doctors, nurses and health workers are fighting to save India from the pandemic but the BJP-RSS agenda is only to win elections and establish Hindu Rashtra. In this situation it is only the path shown by the Naxalbari movement that can help us throw out the fascist Modi government. Naxalbari Day programs were also organized in Banaras, Sonbhadra, Allahabad, Kanpur, Maharajganj, Mathura and other Districts.

Similar programmes were held in other states also.