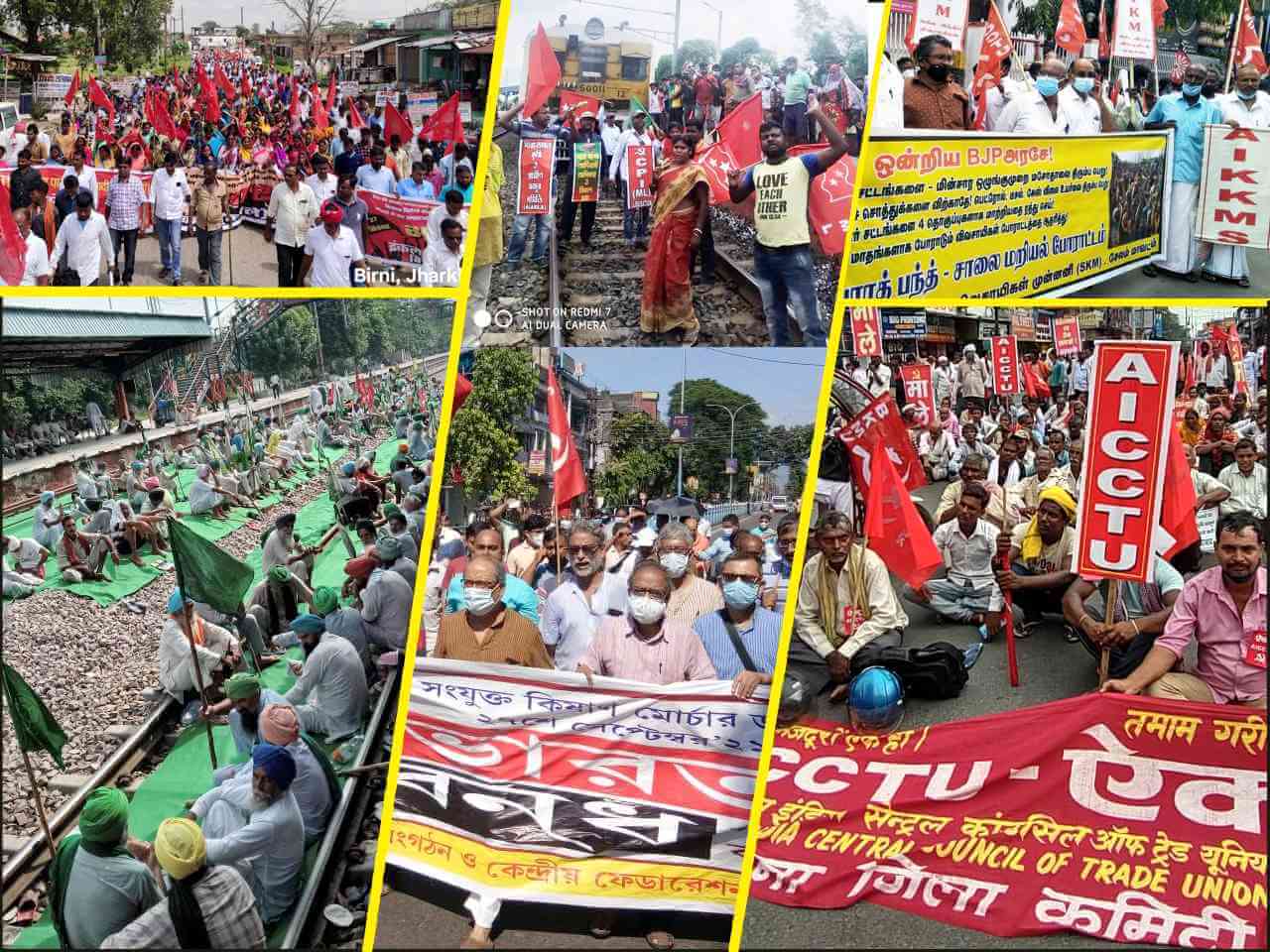 The Bharat Bandh called by Samyukt Kisan Morcha was an unprecedented success for which the SKM complemented lakhs of citizens and thousands of organisations which participated in the Bandh and expressed a remarkable unity and solidarity around the country.

The SKM in a press release said that the “life came to a near standstill in several states like Kerala, Punjab, Haryana, Jharkhand and Bihar. Reports indicate that in several parts of southern Assam, Karnataka, Tamil Nadu, Maharashtra, Rajasthan and Uttarakhand, this was the situation. Scores of protests marked the day in states like Tamil Nadu, Telangana, Karnataka, Rajasthan, Uttar Pradesh and Uttarakhand. In Jaipur and Bangalore, capital cities of Rajasthan and Karnataka, tens of thousands of protestors joined protest rallies taken out in the cities. The overall mood across the country was anger and frustration with BJP-RSS policies that the Modi Government is enforcing, curbing basic freedoms and democracy, and putting most citizens on the path of survival struggle."

“Nearly all Opposition political parties had extended unconditional support to the Bandh. Trade unions were firmly with the farmers, showcasing the unity of farmers and workers once again. Various trader, merchant and transporter associations, student and youth organisations, women's organisations, taxi and auto unions, teachers' and lawyers' unions, journalists' unions, writers and artists and other progressive groups were firmly with the farmers of the country in this Bandh. There were support events by Indian diaspora in other continents too.”

The farmers’ movement had also called the Bharat Bandh on earlier three occasions - on September 25th 2020, on December 8th 2020 and on March 26th 2021 - in the past which too had been a great success.

On the bandh day on 27 September roads were blocked by protesters in many places in West Bengal including Kolkata, Nadia, Bankura and Siliguri by AIKM activists. Activists came out in streets in many places in Kakinada and East Godavari in Andhra Pradesh. Arah in Bihar came to a standstill on the bandh day as all the commercial establishments and road and rail traffic remained closed for hours. AIKM and AIARLA activists blocked rail traffic in Papanasam in Thanjavur in Tamilnadu, while a state highway was jammed in Vaishali of Bihar. People enthusiastically participated in protests and demonstrations held in various towns all across the country. A bike rally was held in Guntur in AP. Common masses also came out on streets in Barsoi in Bihar and in Bagodar in Jharkhand.

All the roads reaching towards Delhi remained blocked by farmers at the borders of the capital. In Uttar Pradesh farmers as well as many organisations took part in Bharat Bandh in spite of the repressive tactics in Yogi regime. At many places police detained protesters.

Samyukt Kisan Morcha had appealed to all Indians to join the Bandh against Modi’s anti-farmer anti-people policies. The SKM appealed in particular to all organisations of workers, traders, transporters, businesspersons, students, youth and women and all social movements to extend solidarity with the farmers on the Bandh day. The SKM had also called upon parties and state governments to endorse the Bandh call. Left parties along with other opposition parties expressed their solidarity and participated in the Bandh. This call was well received by the masses which was evident from the massive participation all over the country.

The Bharat Bandh on 27 September against the 3 black farm laws, 4 labour codes, inflation, unemployment and privatization  received widespread support in Bhagalpur across sections of society. CPIML and AICCTU activists jammed NH 80 at Station chowk for hours. A rally was organized which culminated in a meeting at Bhagat Singh Chowk. The rally returned to Station Chowk via Ambedkar Chowk.

CPIML and AIKM activists came out on the streets across Uttar Pradesh in support of the Bharat Bandh called by the Samyukta Kisan Morcha on 27 September and made the Bandh a historic success. CPIML State Secretary Sudhakar Yadav and District in-charge Ramesh Sengar led the march in Lucknow that culminated in a meeting at Asti Road Chowk. The leaders said that the Modi government is bent on handing over the agricultural sector to corporate houses but farmers will never let this happen and will continue the struggle till the BJP is thrown out of power.

Protest marches and meetings in support of the Bharat Bandh were also organized at many places in various Districts including Ballia, Ghazipur, Devaria, Azamgarh, Gorakhpur, Maharajganj, Basti, Jaunpur, Banaras, Mau, Bhadohi, Mirzapur, Sonbhadra, Allahabad, Rae Bareli, Ayodhya, Gonda, Sitapur, Lakhimpur Kheeri, Pilibhit, Kanpur, Jalaun and Mathura. Leaders and activists from CPIML, AIKM, AIARLA, AISA, AIPWA, RYA, many trade unions, and intellectuals and members of civil society participated in large numbers in the Bandh and vowed to continue the movement till the government revokes the 3 black farm laws. Despite police harassment and obstruction at many places, the Bandh was a resounding success across Uttar Pradesh.

Towards the preparations for the Bharat Bandh various programmes were held in all the states through Conventions, mass contact, mike campaign and nukkad meetings etc . A campaign was conducted by AIKM in terai and bhawar regions of Uttarakhand through nukkad meetings by AIKM veteran leader Bahadur Singh Jangi and others.

In Bihar, village meetings and mass contacts were organised by AIKM and CPIML in all the districts. Left parties held a joint campaign, mass convention and press meet in Tripura to make the call a success. Mashal juloos were also held at many places in states. In Patna town such a torchlight procession received massive response by the people. Campaigns continued for ten days before the bandh day in many places in Bihar including Bhagalpur, Mujaffarpur, Bhojpur, Darbhanga, Patna, Siwan, Gopalganj, Champaran and Katihar.

CPIML units in other states too participated in the Bandh as well as its preparatory campaigns in UP, Jharkhand, Telangana, AP, Tamilnadu, West Bengal and other states.

State Secretary Kunal called for the people to make the Bandh a resounding success. Local issues were also raised along with the main issues of the Bandh which included Bihar's ongoing flood disaster, viral fever epidemic and unemployment. Speakers at the meeting said that the Modi government is bent on handing over farming to capitalists, corporatizing electricity through the Electricity Bill 2020 and selling off all our precious national assets. Tax burden on the common people is increasing incessantly. Unemployment is at a record-break high and wages are getting lower and lower. The country's economy is in tatters.