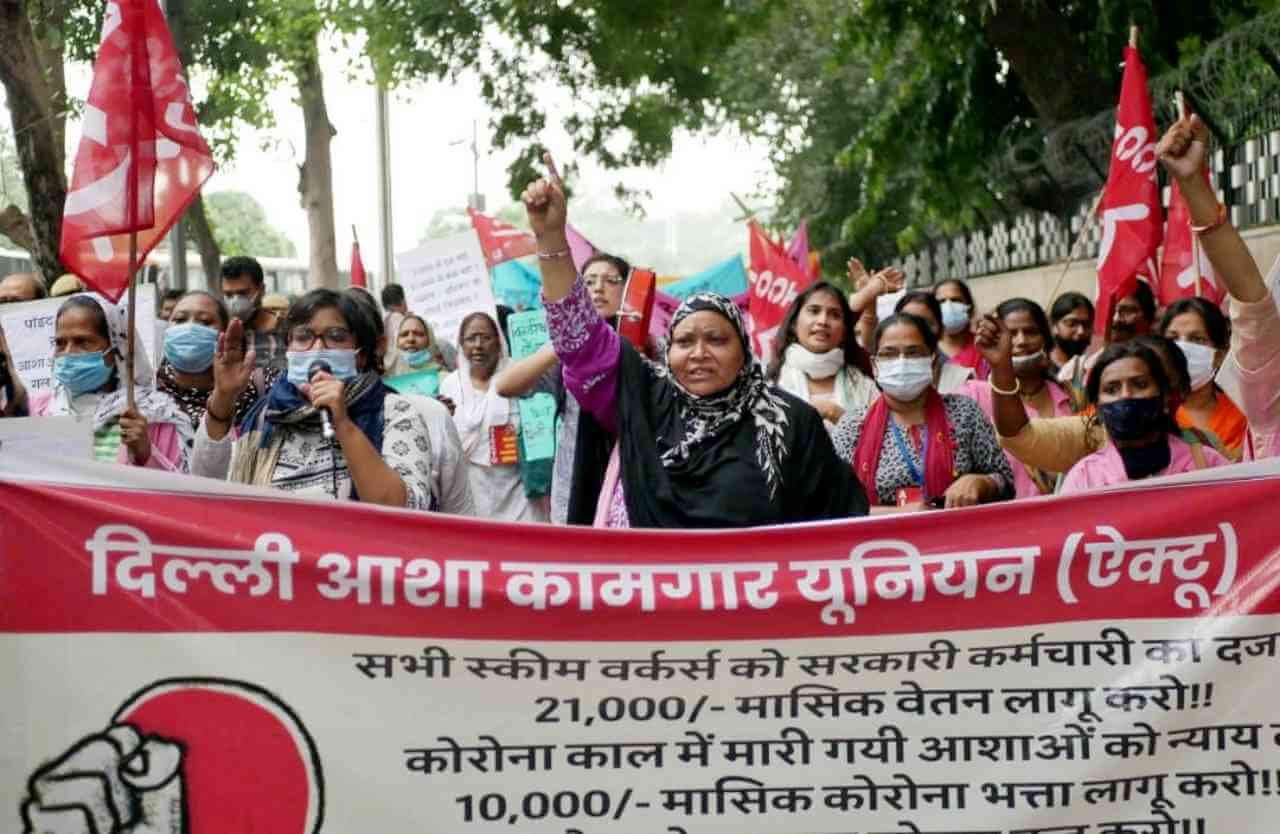 Uttar Pradesh ASHA Workers Union and Uttar Pradesh Midday Meal Workers Union organized a march in Rae Bareli attended by ASHAs and Rasoiyas, after which a memorandum was submitted to the Collector. Dharnas and marches were also organized at Civil Lines in Allahabad, Shivrajpur in Kanpur, Palia in Lakhimpur, Prahari in Deoria, Mau, Jalaun, Bijnor and Lucknow, led by AICCTU, ASHA, Anganwadi and Rasoiya leaders. Memorandums were submitted to the District authorities after the protests.

Hundreds of ASHA workers organized a rights march 'ASHA Adhikar March' from Mandi House in Delhi under the banner of Delhi ASHA Kamgar Union (AICCTU) on 24 September. It is noteworthy that scheme workers including ASHAS, Anganwadis and Rasoiyas across the country organized strikes and protests on this day. ASHA workers from Jehangirpuri, Adarsh Nagar, Wazirpur, Saad Nagar, Palam, Mahipalpur, Chhatarpur, Sangam Vihar, Gautam Nagar, Trilokpuri, Mustafabad, Bhajanpura and other places participated in the protest in Delhi.

At the end of the protest a delegation of ASHAs met the Union Labour Minister Bhupendra Yadav and submitted a memorandum with the following demands: government employee status for ASHAs; Rs 21000 monthly salary; Rs 10000 monthly Corona allowance; maternity leave with pay. They also raised the issues of Rs 1 crore compensation for ASHAs who died during Corona duty and the attacks on the right to unionize. If the Central government fails to take measures to address ASHAs' issues, ASHAs will intensify their protest.

Addressing the meeting at the ASHA protest, Delhi ASHA Kamgar Union General Secretary Shweta Raj said that all scheme workers in the country are being exploited. ASHAs were not provided gloves, sanitizer and masks even during the most horrific phase of Covid. Families of ASHAs who died of Covid were not given compensation. Incentives are cut arbitrarily.

One of the ASHA workers who spoke at the meeting that the Modi government showering petals on us is of no use; we are forced to work at Rs 33 per day even in these times of sky-high prices.

AICCTU General Secretary Rajiv Dimri congratulated scheme workers across the country for their successful protest and said that the government will have to pay a heavy price for ignoring scheme workers.