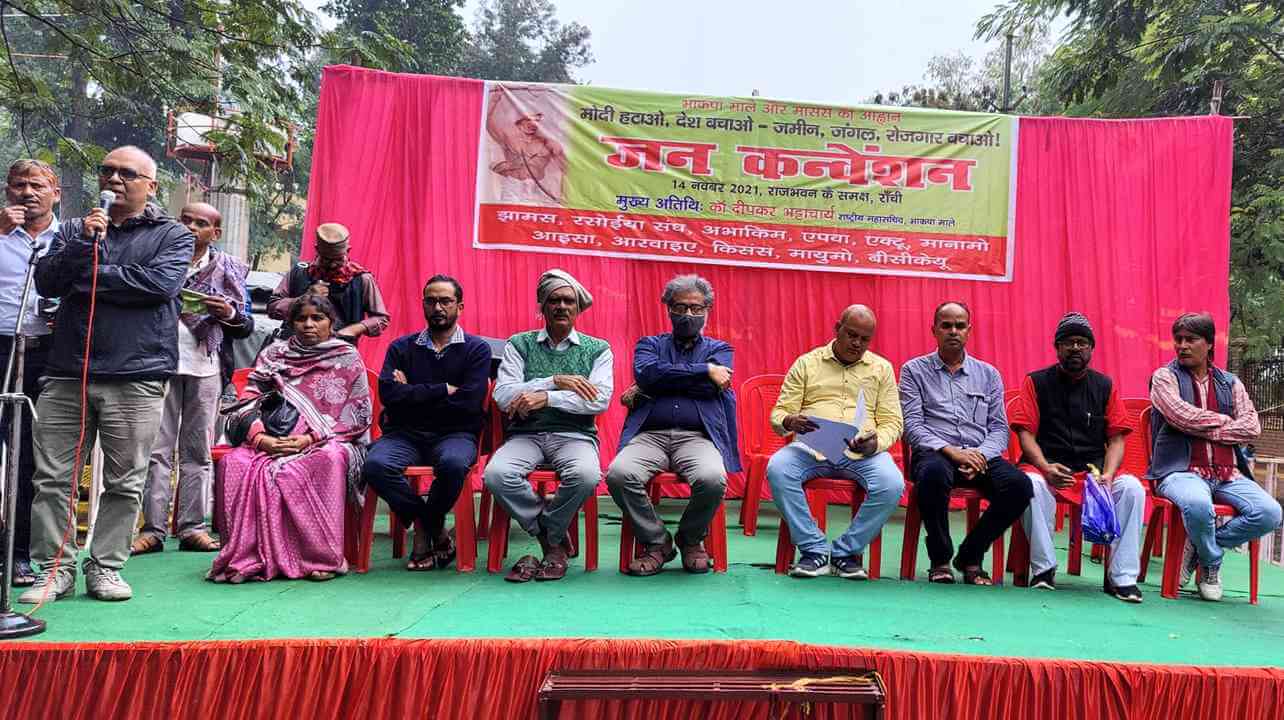 An Adivasi Rights National Convention was held on 14 and 15 November at Bagaicha in Ranchi. Delegates from adivasi organizations across the country participated in the convention held on the occasion of the Birsa Munda anniversary. The Adivasi Sangharsh Morcha was formed for coordinating the adivasi struggles ongoing in various parts of the country. More than 150 adivasi delegates from various states including Jharkhand, Odisha, Assam, Karnataka, Gujarat, Chhattisgarh, Maharashtra, Tamil Nadu and West Bengal participated in the convention.

The convention began with the garlanding of the Birsa Munda statue and an Ulgulan song presented by Jan Sanskriti Manch. Addressing the convention, CPIML General Secretary Dipankar Bhattacharya said that the Company Raj against which Birsa Munda fought and raised Ulgulan is being repeated by Modi Ji who is handing over adivasis' jal-jangal-jameen, minerals and natural resources to Adani-Ambani's corporate companies. Adivasis are being targeted for corporate loot of water, forests and minerals. Birsa Munda Jayanti is being observed by the government as 'Jan Jatiya Gaurav Diwas' which only is an attempt to obliterate adivasi identity. Great coordination and a concerted struggle is needed to fight on all these issues, and CPIML will work as a strong supporter to develop these and strengthen the movement.

The convention was also addressed by adivasi leaders including Dayamani Barla, Premchand Murmu and Devki Nandan Bedia. A resolution on adivasi issues was proposed which was discussed by many delegates including Walter Kandulana, Jerome Gerald, Gautam Singh Munda and delegates representing various states. A 30-point charter of issues for a nationwide adivasi movement was passed by the convention and a road map for the movement was decided. The convention was conducted by an elected Presidium comprising Pratima Inghipi and Ravi Phangcho (Karbi Anglong, Assam), Tirupati Gomango (Odisha), Sumanti Tigga (Chai Bagan, Siliguri), Devki Nandan Bedia and Xavier Kujur.