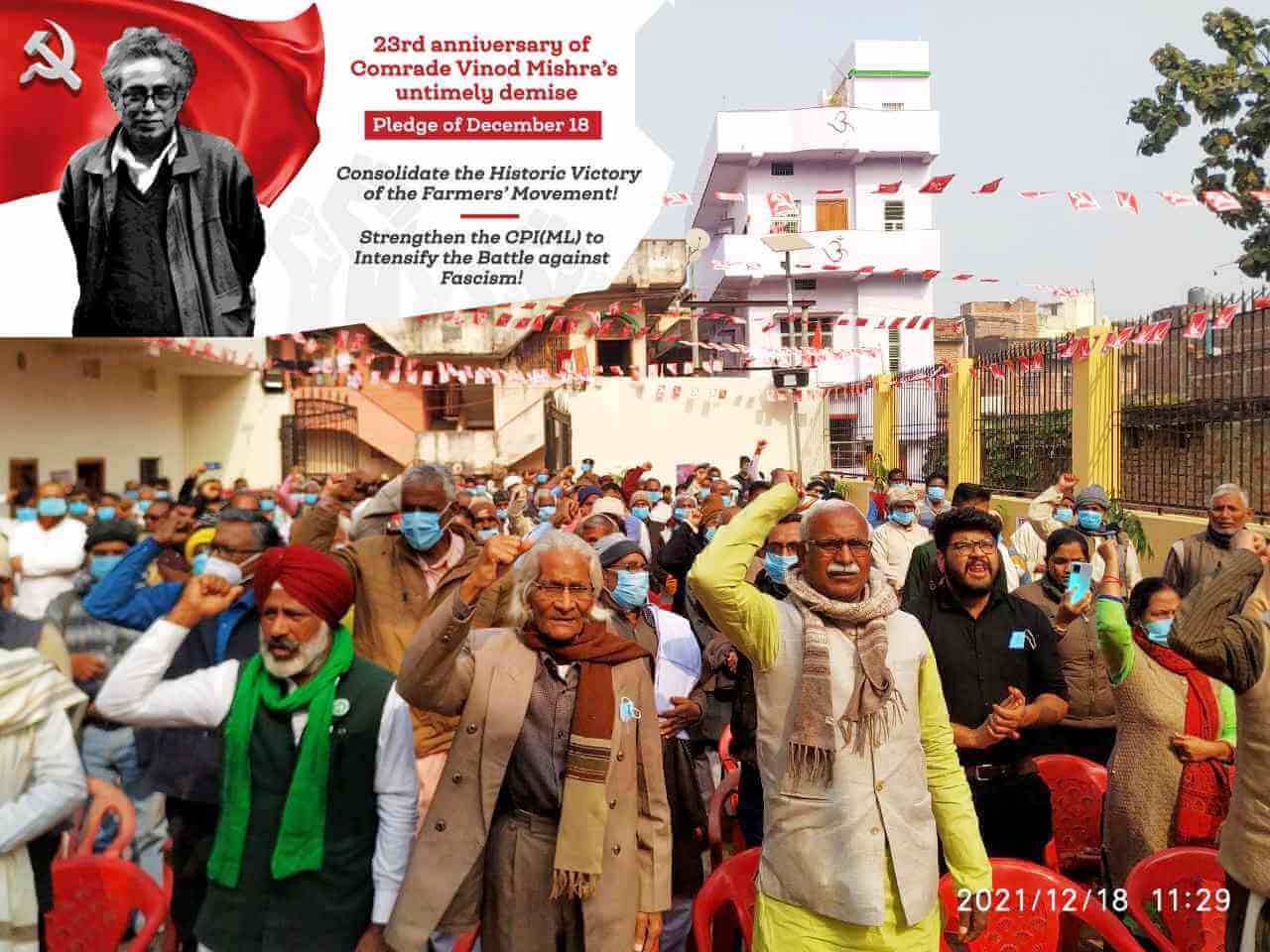 On the 24th commemoration day of former CPIML General Secretary Comrade Vinod Mishra, Sankalp Sabhas were held in all states on December 18 and a resolution issued by the party's central committee was read. Tributes were paid to Vinod Mishra and all the martyrs in all parts of Delhi including the party's central office and at branch level offices including state capitals and all district headquarters.

Senior party leaders were present on the occasion in Patna. Speaking on the occasion, the speakers said that if Comrade Vinod Mishra had been there today, he would have been very happy to see the historic kisan movement turn into an anti-fascist movement. Now is the time to take a pledge to defeat the fascist forces. The strength of the farmers' movement was that it stood firm against communal polarization and instilled confidence in the people fighting for their rights. Despite repealing all the three laws ahead of crucial elections in Punjab and Uttar Pradesh, the government is refusing to enter into any agreement with the kisan movement. The bill to withdraw the three black farm laws has been brought under the guise of 'Amrit Mahotsav of Freedom' and efforts are being made to show that the government has taken these steps to appease the protesting farmers. But arragance and deceit cannot hide the fact that the government has indeed suffered a drubbing at the hands of the farmers. The success of the movement is due to continuous and systematic mobilization of lakhs of farmers. The historic victory of the farmers' movement will inspire us to work for extensive organization building and political mobilization.

Scared by agitations, the Modi government is trying to invert the Constitution by undermining fundamental rights and emphasizing duties. It will be recalled that the Article on duties was brought through a Constitutional amendment during the Emergency. As the government attacks democratic institutions, federal structures, constitutional values and guarantees to the people enshrined in the Constitution, the kisan movement will act as a source of inspiration for the anti-fascism movement that stands up in protest. The kisan movement was also inspired by the historic Shaheen Bagh movement for equal citizenship and rights. The main strength of this movement was the participation and leadership by Muslim women and university students.

The leaders said that today, when we are celebrating the 23rd Memorial Day of Comrade Vinod Mishra, we remember his entire life struggle. He always fought to organize the CPIML as an ideologically courageous, organizationally strong, constructive initiative and a party that carried forward the people's claims. Only a strong party can guarantee the victory of people's struggles. In this age of new challenges, we can also see new possibilities for the expansion of the party. This is necessary to increase the party's initiative. It is time to transform 2022 into a year of better efforts and bigger victories.

The speakers said fascist forces are the main hurdle in building a modern democratic India. They use communalism as a weapon to break the unity of the people. However, the historic kisan movement foiled this evil poison on the strength of its unity. Now, with imminent assembly elections in five states including UP, the BJP is again fanning the politics of hate and the Sangh Parivar is using Mathura-Kashi to divert attention from real issues and BJP's failures.

In this situation the true tribute to Vinod Mishra will be to recognize and expose this conspiracy by the Sangh and to throw out the fascist BJP government by focusing the people's attention on the real issues.

Sankalp sabhas were also held in various other states across the country.