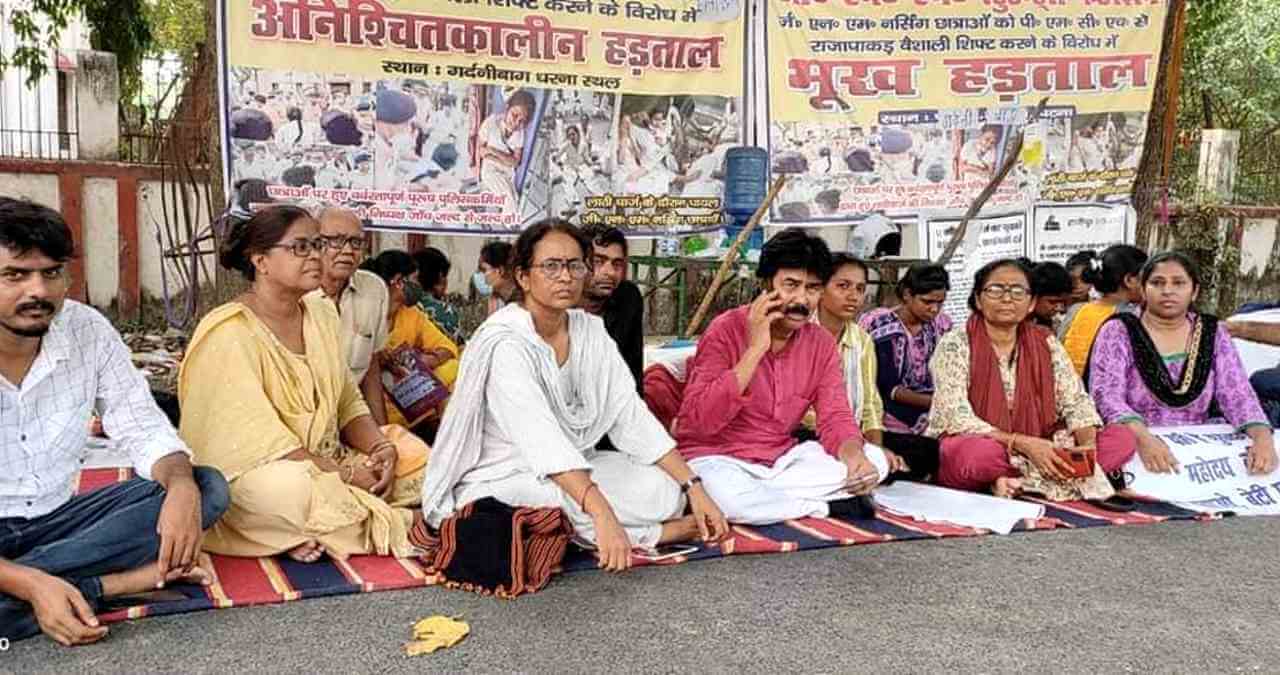 PMCH Nursing students, agitating for more than one month against their hostel being shifted from PMCH to Rajapakar, have now been sitting on a hunger strike for the last 5 days at their dharna site in Gardanibagh. The women students do not want to go to Rajapakar as it is a remote area and they are fearful for their security.

AIPWA and AISA leaders and activists are also sitting on hunger strike in solidarity with the students. CPIML legislative party leader Mahboob Alam reached the site and said the party would raise the matter in the Assembly and also assured them that he would speak to the Health Minister. He said that the government is adopting a totally insensitive attitude in this matter.

AIPWA General Secretary Meena Tiwari said that the organization has been consistently supporting the students in their just demand and are sitting on hunger strike in solidarity with them. The government which boasts of ‘development’ is unable to accommodate 200 girl students in Patna! This in itself exposes the hollow claims of development by these governments, which talk big about ‘Beti Bachao Beti Padhao’ but wield lathis on girl students demanding their rights. Only recently a girl was raped and murdered in Rajapakar. Sending girl students to live there is very wrong. The government should withdraw its diktat to shift the Nursing students’ hostel to Rajapakar and make arrangements to accommodate them in Patna.

AISA Bihar State President Vikas Yadav accused the government of being insensitive and pointed out that the girl students have been on hunger strike for 5 days but no government representative has come to meet them. The Health Minister must resolve this issue and give justice to the students.
AICCTU leader Ranvijay Kumar and Mahasangh (Gope Group) Honorary President Rambali Prasad supported the students’ agitation and demanded that they should either be accommodated in the newly constructed ITI women’s hostel at Digha or paid house rent allowance. They also pointed out that the government fulfills all demands of Group-A, but as these are Group-C Nursing students their demands are being adamantly denied.

The leaders expressed fears of a Nitish-BJP conspiracy to privatize the 5000-bed world-class hospital being built on the PMCH campus and doubts that this is the reason for using police terror to evacuate the Nursing students from their hostel.